Last Saturday over a week ago, we got up very early and drove 2 hours to pick Daniel up from Camp Lakewood. He actually looked like he had gained weight which was surprising. One of our goals keeping him busy during the summer is to keep him from gaining weight and becoming inactive.

He was very happy to see his family and especially his Mom and Dad. He acted different but maybe he seemed more grown up. He said he had a great time and made friends including a girlfriend named Kiki.

We watched his ceremony and it was fun to watch. It is a great and beautiful camp.

Kevin and I drove back with Sadie so that his Mom and Dad could get some alone time on the 2-hour drive back to talk to him about his time there. Sadie sucks up all the attention if she can. J

After my Sunday morning run, I showered and went to meet up with my son, daughter in law and my kiddies to go to lunch at a favorite place Llewelyn’s Pub in Soulard, St. Louis.

Afterwards, we took Daniel and Sadie to our apartment to spend the night. PyPy made Daniel and Sadie’s favorite, Italian spaghetti and meatballs made of veal, beef and pork. It was a delicious meal and they loved it. They are very impressed with all his cooking. It was pouring down rain all weekend so we stayed in the apartment and played games and had tea parties.

Sadie feel asleep very early at 8pm so I got to spend time with Daniel and ask questions about camp. I am sad he is growing up but happy to see him do grown up things that make him feel important.

On this training marathon training program, I have 4 runs per weeks on Monday, Wednesday, Thursday and Friday. Wednesday run is usually a fairly longer run and Saturday is the longest. I am supposed to cross-train on one of my off days but I don’t do that yet.

Week 03 Chicago Marathon Training: Last weekend was unseasonably cool and rainy. I did my long run of 7 miles on Sunday morning. I wanted a city run and not a park. Kevin rode his bicycle to accompany me on the streets of St. Louis. I actually love running the city and only once or twice have I been afraid. I’m not a person that gets scared easy and that may not be a good time. I don’t mind running alone most of the time in downtime St. Louis.

The run started out with a nice, cool drizzle. After about 3 miles, the bottom dropped out and I got drenched. I loved it. I always run better during the rain mainly because I don’t sweat enough and my body overheats. Rain is always a welcome event for me on a run. After you get wet, what the hell…enjoy the run.

I had a nice and strong run. I felt good and enjoyed it as I always enjoy running the streets of downtime St. Louis. I love city running because I enjoy the scenery of old St. Louis historic brick buildings. I pass restaurants, bars and places that I’ve never noticed. I know those streets so well but I always see something different. City running distracts me and trail or regular sidewalk running does not. It always feels different.

I engage in the city so the running doesn’t seem so much like a chore. I do most of my long runs in St. Louis for that reason.

Week 04 Chicago Marathon Training: I completed my 4 runs this week. Wednesday runs are much harder for me than weekend. The last thing I want to do after a 11-hour day at work is run. And with the intense heat and humidity, I did many on the treadmill. I am learning how to use the treadmill to my advantage. I can control the speed and incline so I can challenge myself with faster speeds and higher inclines. I think it’s helped me to hold a consistent speed and cadence. I should be doing some cross-training but I have not yet incorporated that into my training. That may be a mistake but due to colon surgery, I’m limited. Maybe I’m using that for an excuse.

Yesterday was my 8 mile run. It wasn’t supposed to be a hot day but it got humid very early. I didn’t start until 9 am and I decided to do a street run versus the trail run that I usually do here in Columbia. I did a route that one of the local running clubs routed and invited me to that I never go to. It was through the town of Columbia and went through some trails. 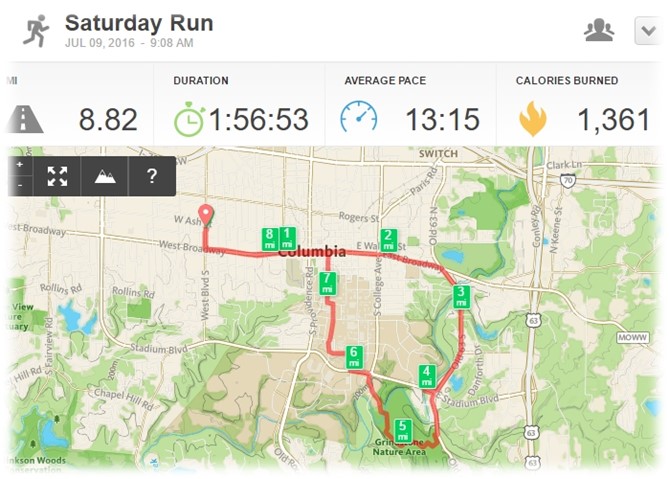 The first 3 miles was relatively easy and I had a good pace and felt good but then came the huge hills and inclines. Kevin rode along beside me on his bicycle which I always appreciate. I made a wrong turn on a trail and made my 8 mile run almost 1 mile longer which was not good today. I became overheated. I have an issue that has plagued me all my running career. I cannot sweat outside when it’s humid. I have never asked a doctor and when I google it, I never see anything that can help. If I run when it’s cold or I run inside, I sweat profusely. In fact, after a humid run in which I can’t sweat, when I walk into the cool house, the sweat pours. It’s frustrating but it’s something that I have to live with. I sometimes use a cooling towel when I run. It helps a bit.

Today, Kevin and I took our bikes to Rocheport to ride 10 miles or son on the KATY trail. It was hot and humid but very enjoyable. Rocheport is a beautiful little quaint progressive town where people make wine, pottery, have many wine stroll events and smoke weed. It is located on the Missouri river and the KATY trail which makes it a touristy place. It is also home to one of the area favorite wineries Les Bourgeois.

The KATY trail is part of the Katy Trail State Park is a state park in the U.S. state of Missouri that contains the Katy Trail, a recreational rail trail that runs 240 miles (390 km) in the right-of-way of the former Missouri–Kansas–Texas Railroad.

I needed this workout because my legs were spent from yesterday’s nightmarish run. It was a good ride and beautiful bluffs, caves and beautiful wildflowers the entire ride.

Tomorrow is a 3 miler, 5 on Wednesday, 3 on Thursday and 10 on Saturday. We may head to St. Louis this coming weekend to do my run plus catch a Cardinals game.

I need to find a way to build up my confidence for the upcoming 10 miler. It’s only going to get worse from here! But marathon training almost makes me a better and healthier person. J

The other day my husband said something surprising to me. He told me I was much more beautiful when I run a lot. He also said that my eyes prettier. I’m not sure what running has to do with my eyes but he doesn’t throw out many romantic compliments often. God knows he suffers along with me during my training. That made me feel good that he paid such a compliment.

I almost made it 21 days “21 Day No Junk Food Challenge” but on the last day, Kevin bought a caramel bar from Whole foods which I can’t resist and I ate half of it! But I started it again. I’m not sure it’s a no junk food but it is no sugar, cookies, bars, pies, chips, crackers etc. but I do drink alcohol which probably is not the best thing to do during marathon training or for health in general. I have lost about 10+ lbs since my surgery. I would like to lose about 10 more lbs before we go to Santa Cruz on Aug 23.

I doing very well on this plan based on my rules. But I don’t eat the normal things that I am prone to eat such as sweets, cookies, donuts, cakes, potato chips etc so that is a win for me.

On a serious and sad note, please support our law enforcement. I cannot imagine living in St. Louis, Columbia, Kansas City without those brave men and women. I personally thank them every time I see them. There may be bad apples and bad guys in that lot of people. It goes to reason; they are chosen from the same population that other criminals and good people come from….the human race.

I will admit that I tend to give police the benefit of a doubt. I just don’t believe that most police would kill a man in cold blood because he is black. If he does, I want him punished just like everyone else.

My husband is a black man. His dad was black and his mother is Cuban/Bahamian. Kevin was raised in Buffalo, NY. And because he looks mostly white like his beautiful mother, he has seen both ugly sides of racism. He didn’t fit in black communities in Buffalo NY which he was raised until he was 12 years old and when he moved to Sunnyvale, CA, where he didn’t look quiet white. He doesn’t classify himself as black, Cuban, or white. He is a man and a good human being. He and I are both conservative type people but we care about others. We support gay marriage and equal rights for all human beings. I’m heartbroken over how the country seems so divided and full of hate right now.

Kevin and His Beautiful Family

DPD Sgt. Michael Smith, 55, a former Army Ranger who had been with the department since 1989.

DPD Senior Cpl. Lorne Ahrens, 48, who had been with the department since 2002.

DPD Officer Michael Krol, 40, who had been with the department since 2007.

DPD Officer Patrick Zamarripa, 32, a Navy sailor and Iraq War veteran who had been with the department since 2011

DART Officer Brent Thompson, 43, a former Marine who had been with the department since 2009. Thompson was the first DART officer to be killed in the line of duty since the department’s inception in 1989. After serving in the Marine Corps, Thompson worked in the Middle East for a Pentagon contractor, hiring and training police in Iraq and Afghanistan in “democratic policing.”

My Social Stuff (Hit Me Up)

Recent Posts: I Run in the Rain

Willow or an Oak?

Bread is My Medium

A Landslide Brought Me Down

Turning Anger and Sadness into Something Else